What Are Mining Claims?

The best way to describe what mining claims are, is to give you an illustration that is pretty much universally understood. Years ago the US government wanted the west settled by pioneers. As a result Congress created the "Homestead Act". If a family moved west and took over a 160 acre parcel of land and did certain things to it (clear it, farm it, build their home on it, etc) for a number of years, THEN the US Government would give them a "Homestead Patent" or deed for their efforts. After that point in time, the "homesteader" did not have to farm it, or live on it, etc. The land was his to do with as he choose. "Patent" simply is another word for "deed" from the US government. Essentially, the ownership of all lands west of the Mississippi River originated from patents.

Mining claims, like homesteads, were created by a worker (in this case a prospector looking for gold, silver, lead, zinc, copper, etc.) who would go into the mountains and "stake his claim". At this point the mining claim is not yet patented. The miner would have to perform a certain amount of work to the property (tunnels, roads, panning for gold, etc.) that could "prove" his claim. The standard was this: "Could a reasonably prudent man make a living from this property?" Remember that this was being done during an era of "Lets go settle the west", so "reasonably prudent" was very often liberally construed. So long as he met the standards passed by Congress, the miner was then awarded a "Mining claim patent" for his land. At this point he, like the homesteader, no longer had to perform his due diligence to the property. The land could be bought, sold and traded and the owner could build a house or a hotel or, as is the case in many Colorado mountain towns...even a ski area or two. I do not sell any unpatented mining claims (ones where the miner has never yet obtained a patent from the US Government).

What Do You Get When You Buy A Mining Claim?

Unless previously reserved by a prior owner or the government (which would be very unusual), you get full title (fee simple absolute) to the surface and the minerals. Title to mining claims can be passed by general warranty deed and title insurance is available as well. Most of the mining claims that I sell, will even have title insurance on the minerals, but be sure to ask me about that for each property. Just like any other land, mining claims are subject to the county building and zoning regulations.

Lode claims tend to be 300 feet wide by 1500 feet long, which would net 10.331 acres. Ideally, the miner's "Vein of gold" runs the full 1500 feet in length and he can follow it underground to the center of the earth. He cannot mine beyond either of the 2 end lines (the 300 foot ones). These are properties where the owner is tunneling into the rock; drilling and blasting to move the rock. Excavations that are horizontal are called tunnels or drifts. Excavations that go down into the ground are called shafts. Excavations that mine upward or vertically are called stopes. Placer claims do not have a definite shape and can be much larger (I have seen up to 120 acres). These are "staked out" around rivers and streams, as these are the kinds of claims where a miner "pans for gold" like you often see in old western movies. The last type of claim is a millsite. When miners blast all of the rock and end up with ore, they need to process that ore to make it into gold, silver, lead, zinc, copper, etc. That work was done on a millsite. They had a 5 acre limit for size, but I am not aware of any particular shape requirement. In all 3 instances, once these properties were patented, the owner no longer needed to do his "assessment work" (the term applied to all of the preliminary work required to obtain the patent) and could use them as he so desired. Mining claims often "overlap" another mining claim. Even though that seems unusual, it is almost the norm with mining property. Remember that the miner staked his claim so the vein would run the 1500 foot direction on his property. Suppose another vein a hundred or so feet away takes a turn and crosses over the first vein? This happens all the time. The answer to who owns the "overlapping" area lies in the actual Patent" signed by the president of the United States. These are old documents (generally microfilmed) that are a neat collector's item aside from being actual title documents that pertain to your property.

By their very nature, mining claims are located in the rugged mountains because that is where God put the minerals around here. Consequently, claims tend to be steep with maybe a building spot or two for a nice cabin or camping site. Views tend to be spectacular, particularly if you come from the flatlands back east. Many claims are located above timberline (roughly 11,400 feet) and electricity is pretty rare. As to their exact locations on the ground, all of the claims had to be surveyed by a US Mineral Surveyor in order to obtain the patent. Often times those original corners (usually a 4x4 post set in the middle of a pile of stones) is gone. Claims that have corners that we can find cost more than ones where we are "guessing" as to their location. Access is another issue. Some claims, particularly placer and millsites, were located down lower as they needed to be accessible by wagons etc. As such, these tend to have roads running through them or close by. Mining claims with driveable access are worth more than ones that do not have that. Year round access would be worth the most, of course. To get a claim re-surveyed and have the corners marked, could be expensive. Estimates could range from $3,500 to $10,000.

Many of the mining properties that I sell either already have a retained royalty on them or one will be added by the seller. A royalty right does not give the owner of that right a right to mine or execute a lease to a mining company to mine. However if you (the new owner) mine or if you hire someone to mine, THEN a certain percentage (usually between 3 and 6%) of the revenue is paid to the royalty owner. The royalty owner CANNOT make you mine, so it is an interest that only kicks in if mining is going on. 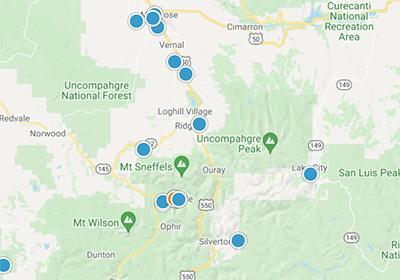